Towards a New Climate: Lowering the Skeptic Index 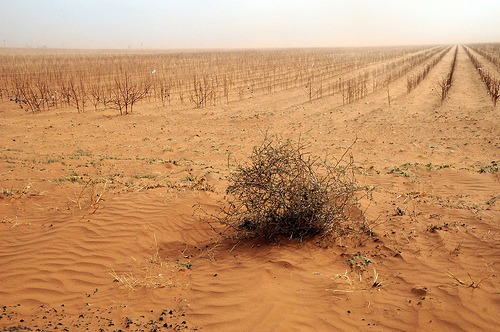 At the height of one of the most severe Texas droughts on record, Yale Environment 360 sought the local perspective and expertise of Katharine Hayhoe, an associate professor of atmospheric sciences at Texas Tech University in Lubbock, in an attempt to better understand how present weather conditions fit into the larger mosaic of climate change. In the resulting interview, Hayhoe affirms the crucial point that climate is defined as the average weather over 30 years or more, while suggesting that our qualitative assessment of present conditions is not to be discounted. We may, after all, be experiencing what is to become “the new normal” for summers in Texas, assuming global warming trends continue unabated. But to what extent can these record-breaking temperatures be utilized responsibly for raising climate change awareness? Is it an opportunity to educate a newly inquisitive, and perhaps more receptive, population?

Living in the heart of the traditionally conservative Southern United States, Professor Hayhoe is acutely familiar with these questions.  She estimates that at least 65% of the evangelical community are skeptical to claims of anthropogenic climate change, compared to just 27% of the public at large. This is not to suggest, however, that faith-based communities do not have questions about what is happening to their environment. To address these questions, Hayhoe coauthored a book called A Climate for Change: Global Warming Facts for Faith-Based Decisions, in which she argues for environmental stewardship. Since publication, she has been invited to speak at a number of Christian colleges, churches, and other faith-based organizations, from which she optimistically reports:

Being with people like that makes me feel there’s a lot more going on at the grassroots level than we realize, with churches and congregations retrofitting their buildings to become more energy-efficient, people really taking the stewardship message to heart, that we have this planet that we need to care for. And also just identifying things we have in common. We all want a better world for our children, we all think it’s good to conserve our natural resources and not be wasteful, we all want to be able to invest in our economy and not be held hostage to foreign oil. I think that is the way to move forward on this issue.

By identifying the innumerable shared values of the scientific and religious communities, she is able to present an apolitical case for sustainability. But while significant progress has been made on some fronts, the issue of climate change has become increasingly polarized in the United States, as demonstrated by the recent Republican presidential debates. All but one of the major contenders for the GOP presidential nomination publicly deny anthropogenic climate change and oppose all measures by the EPA to reduce carbon emissions. Texas’ own Rick Perry recently voiced the degree of his own skepticism while campaigning in August:

I think there are a substantial number of scientists who have manipulated data so that they will have dollars rolling into their projects. I think we’re seeing it almost weekly or even daily, scientists who are coming forward and questioning the original idea that man-made global warming is what is causing the climate to change. Yes, our climates change. They’ve been changing ever since the earth was formed. But I do not buy into, that a group of scientists, who in some cases were found to be manipulating this data.

Perry is almost certainly referring to the Climatic Research Unit leaked email controversy that engulfed the media in November of 2009, mere weeks before the 2009 United Nations Climate Change Conference in Copenhagen. The purported emails mentioned the use of “tricks” for the purpose of “hiding” undesirable data points, which were said to have been taken out of context. At least six independent investigative committees ultimately cleared the researchers of any scientific misconduct, and their work was reaffirmed as credible and consistent with the overwhelming scientific consensus. Nonetheless, climate skeptics continued to cling to the leaked emails as incontrovertible proof of a widespread scientific conspiracy. Why?

At least one report, commissioned by Sir Muir Russell, criticized the researchers on the grounds that “there has been a consistent pattern of failing to display the proper degree of openness, both on the part of [Climatic Research Unit] scientists and on the part of the [University of East Anglia].” Perhaps more so than the horrifying politicization of science, it is a lack of transparency and dialogue that impedes the progress of raising awareness for climate change.  Too few scientists are willing to reach out to people precisely where they are, to patiently answer questions, and to find common ground.

Scientists like Katharine Hayhoe, fortunately, are working to do precisely that.